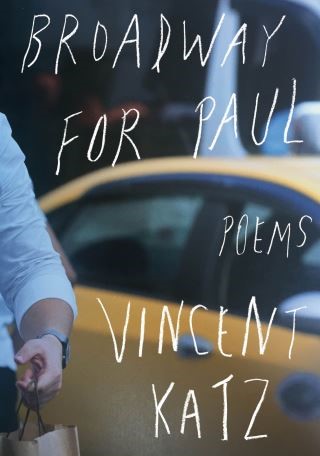 Friendship, love, and the potential energy of change animate these poems of walking through New York City.

Broadway, the famous artery, both off the grid and definitive of Manhattan as it cuts its way downtown, is a metaphor for Katz's path through these poems: from Lincoln Plaza on the Upper West Side to the African Burial Ground and the courthouses downtown, Katz mines his native city for the deep humanity that undergirds its streets. His title, with its implication that one could give something as large and undefinable as Broadway to a single person, courts an impossibility that generates the possibility of friendship, as well as the largesse Katz wants to find in our civic discourse. In poems such as "Ivanka Skirting" and "This Beautiful Bubble" we encounter his reckoning with a divisive culture that can, he suggests, be healed through our daily acts--through a kind of alert graciousness that also defines his poetry. In this moving collection, we enter Katz's world, both public and private, and experience poetry as a way of seeing that can change hearts and minds.

Vincent Katz: VINCENT KATZ is the author of the poetry collections Southness (2016) and Swimming Home (2015) and of the book of translations, The Complete Elegies of Sextus Propertius (2004), which won a National Translation Award from the American Literary Translators Association. He is the editor of Black Mountain College: Experiment in Art (2002), and his writing on contemporary art and poetry has appeared in publications such as Apollo, Art in America, ARTnews, The Brooklyn Rail, and The Poetry Project Newsletter. As curator of the "Readings in Contemporary Poetry" series at Dia: Chelsea, Katz also edited the anthology Readings in Contemporary Poetry (Dia Art Foundation, 2017). He lives in New York City.