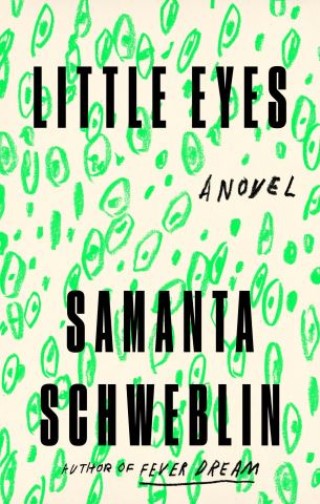 "Her most unsettling work yet — and her most realistic." --New York Times

A visionary novel about our interconnected present, about the collision of horror and humanity, from a master of the spine-tingling tale.

They've infiltrated homes in Hong Kong, shops in Vancouver, the streets of in Sierra Leone, town squares in Oaxaca, schools in Tel Aviv, bedrooms in Indiana. They're everywhere. They're here. They're us. They're not pets, or ghosts, or robots. They're real people, but how can a person living in Berlin walk freely through the living room of someone in Sydney? How can someone in Bangkok have breakfast with your children in Buenos Aires, without your knowing? Especially when these people are completely anonymous, unknown, unfindable.

The characters in Samanta Schweblin's brilliant new novel, Little Eyes, reveal the beauty of connection between far-flung souls--but yet they also expose the ugly side of our increasingly linked world. Trusting strangers can lead to unexpected love, playful encounters, and marvelous adventure, butbut what happens when it can also pave the way for unimaginable terror? This is a story that is already happening; it's familiar and unsettling because it's our present and we're living it, we just don't know it yet. In this prophecy of a story, Schweblin creates a dark and complex world that's somehow so sensible, so recognizable, that once it's entered, no one can ever leave.

Samanta Schweblin: Samanta Schweblin is the author of the novel, Fever Dream, a finalist for the Man Booker International Prize and the collection A Mouthful of Birds, longlisted for the Man Booker International Prize. She was chosen as one of the twenty-two best writers in Spanish under the age of thirty-five by Granta. She has won numerous prestigious awards throughout the world, and in English her work has appeared in The New Yorker and Harper's. Her books have been translated into twenty-five languages. Originally from Buenos Aires, she lives in Berlin.

Megan McDowell has translated books by many contemporary South American and Spanish authors, and her translations have been published in The New Yorker, Harper's, The Paris Review, McSweeney's, Words Without Borders, and Vice, among other publications. She lives in Chile.