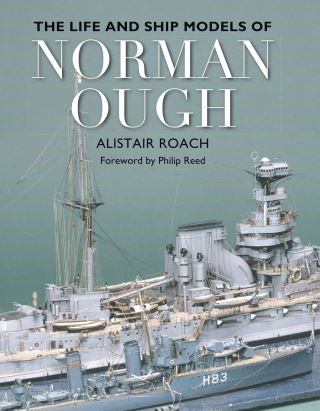 The Life and Ship Models of Norman Ough

“Brings Ough’s life and work beautifully to light in a volume rich in photographs, drawings, technical detail and personality.”—Schopenhauer’s Workshop

Norman Ough is considered by many as simply the greatest ship modeler of the twentieth century and his exquisite drawings and meticulous models have come to be regarded as masterpieces of draughtsmanship, workmanship and realism; more than technically accomplished ship models, they are truly works of art.

This new book is both a tribute to his lonely genius and a practical treatise for model shipwrights. Ough lived most of his adult life far from the sea in a flat high above the Charing Cross Road in London, where his frugal existence and total absorption in his work led to hospitalization on at least two occasions; he was an eccentric in the truest sense but he also became one of the most sought-after masters of his craft. Earl Mountbatten had him model the ships he had served on; his model of HMS Queen Elizabeth was presented to Earl Beatty; film production companies commissioned models for effects in several films.

Incorporating many of his original articles from Model Maker Magazine, his detailed line drawings now kept in the Brunel Institute, and photographs of his models held in museums and at Mountbatten’s house, this book presents an inspiring panorama of perhaps the most perfect warship models ever made.

“An amazing, almost intimidating view of the method, modelling, drawings, and a life of a builder so obsessed with his work that some may say he was a man who went down with his ships.”—FineScale Modeler