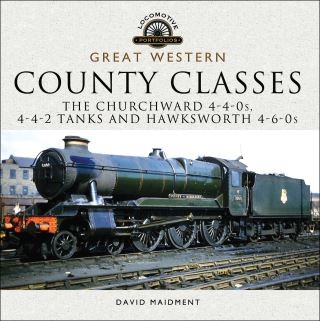 The Great Western Railway, had two classes of tender locomotives named after counties, the first class of two cylinder 4-4-0 tender locomotives, designed by George Jackson Churchward, were introduced in the 1900s to provide efficient motive power, including lines on the 'North & West' route between Hereford and Shrewsbury, owned jointly by the Great Western and L.N.W.R.The 4-4-0 counties were in service until the early 1930s, when they were withdrawn and replaced by more modern motive power.The 4-4-0 counties, were paralleled in design by the county 4-4-2 tanks, which operated suburban services in the London area and were also withdrawn in the early 1930s.In 1945, the Great Western Introduced the County 4-6-0 tender locomotives, designed by F W Hawksworth, these two cylinder machines had a high pressure boiler, that was meant to give the same tractive effort as a Castle class, 4-6-0, four cylinder locomotive,After modifications and boiler pressure reduction, the County class 4-6-0s, operated in express and semi fast train service, until the last members of the class were withdrawn in 1964.