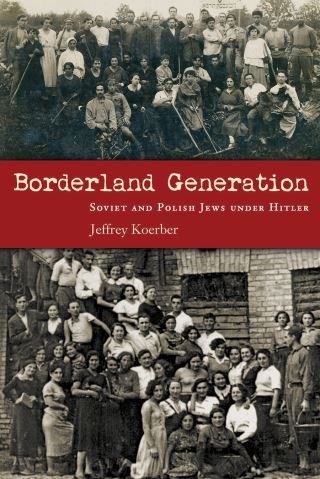 Soviet and Polish Jews under Hitler

Despite their common heritage, Jews born and raised on opposite sides of the Polish-Soviet border during the interwar period acquired distinct beliefs, values, and attitudes. Variances in civic commitment, school lessons, youth activities, religious observance, housing arrangements, and perceptions of security deeply influenced these adolescents who would soon face a common enemy.
Set in two cities flanking the border, Grodno in the interwar Polish Republic and Vitebsk in the Soviet Union, Borderland Generation traces the prewar and wartime experiences of young adult Jews raised under distinct political and social systems. Each cohort harnessed the knowledge and skills attained during their formative years to seek survival during the Holocaust through narrow windows of chance.
Antisemitism in Polish Grodno encouraged Jewish adolescents to seek the support of their peers in youth groups. Across the border to the east, the Soviet system offered young Vitebsk Jews opportunities for advancement not possible in Poland, but only if they integrated into the predominantly Slavic society. These backgrounds shaped responses during the Holocaust. Grodno Jews deported to concentration camps acted in continuity with prewar social behaviors by forming bonds with other prisoners. Young survivors among Vitebsk’s Jews often looked to survive by posing under false identities as Belarusians, Russians, or Tatars. Tapping archival resources in six languages, Borderland Generation offers an original and groundbreaking exploration of the ways in which young Polish and Soviet Jews fought for survival and the complex impulses that shaped their varying methods.