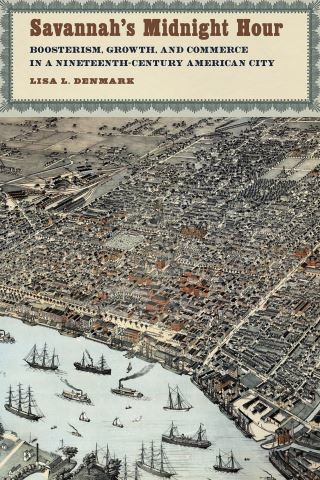 Boosterism, Growth, and Commerce in a Nineteenth-Century American City

Savannah’s Midnight Hour argues that Savannah’s development is best understood within the larger history of municipal finance, public policy, and judicial readjustment in an urbanizing nation. In providing such context, Lisa Denmark adds constructive complexity to the conventional Old South/New South dichotomous narrative, in which the politics of slavery, secession, Civil War, and Reconstruction dominate the analysis of economic development. Denmark shows us that Savannah’s fiscal experience in the antebellum and postbellum years, while exhibiting some distinctively southern characteristics, also echoes a larger national experience. Her broad account of municipal decision making about improvement investment throughout the nineteenth century offers a more nuanced look at the continuity and change of policies in this pivotal urban setting.

Beginning in the 1820s and continuing into the 1870s, Savannah’s resourceful government leaders acted enthusiastically and aggressively to establish transportation links and to construct a modern infrastructure. Taking the long view of financial risk, the city/municipal government invested in an ever-widening array of projects—canals, railroads, harbor improvement, drainage— because of their potential to stimulate the city’s economy. Denmark examines how this ideology of over-optimistic risk-taking, rooted firmly in the antebellum period, persisted after the Civil War and eventually brought the city to the brink of bankruptcy. The struggle to strike the right balance between using public policy and public money to promote economic development while, at the same time, trying to maintain a sound fiscal footing is a question governments still struggle with today.