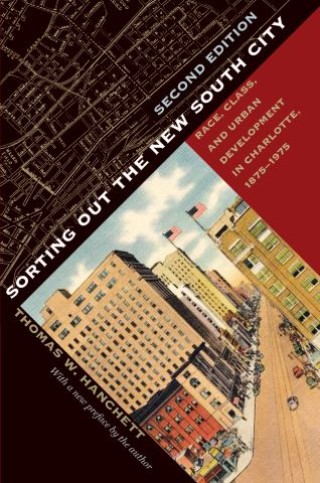 One of the largest and fastest-growing cities in the South, Charlotte, North Carolina, came of age in the New South decades of the late nineteenth and early twentieth centuries, transforming itself from a rural courthouse village to the trading and financial hub of America's premier textile manufacturing region. In this book, Thomas W. Hanchett traces the city's spatial evolution over the course of a century, exploring the interplay of national trends and local forces that shaped Charlotte and, by extension, other New South urban centers.

Hanchett argues that racial and economic segregation are not age-old givens but products of a decades-long process. Well after the Civil War, Charlotte's whites and blacks, workers and business owners, lived in intermingled neighborhoods. The rise of large manufacturing enterprises in the 1880s and 1890s brought social and political upheaval, however, and the city began to sort out into a "checkerboard" of distinct neighborhoods segregated by both race and class. When urban renewal and other federal funds became available in the mid-twentieth century, local leaders used the money to complete the sorting-out process, creating a "sector" pattern in which wealthy whites increasingly lived on one side of town and blacks on the other. A new preface by the author confronts the contemporary implications of Charlotte's resegregation and prospects for its reversal.