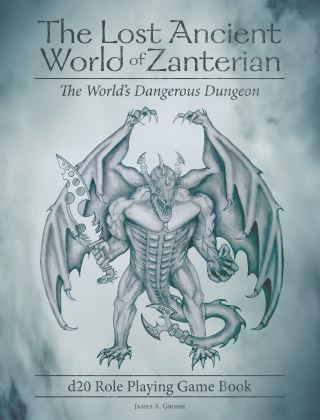 The Ancient Lost World of Zanterian is a very complexed in existence. It is a world with 10 layers “Planes “, that coexist with each other. Paradox- The Dragon Emperor of the gods. He has intervened in the prophecy. Paradox has created ancient portals that connect the planes and other worlds for his dragons, and the magic weave. The other gods / goddess intervened in mortality to enhance their power and domain. This is forbidden by the goddess of Destiny. She had slammed her Scepter of Destiny into the ground of the world of Zanterian; Creating what is known as The Lost Ancient World of Zanterian. It is a world trapped between Planes; stuck in a time lock. The World’s Dangerous Dungeon sets deep beneath the earth in the Ancient World of Zanterian. It is an ancient prison designed by Embreal the ancient goddess of Creation. She designed it upon request for Clearalious the ancient goddess of Righteousness and Judgement. She is a Chaotic Good goddess. Her Angel- Queen Vargon imprisoned most of the evil being and monsters in the dungeon, which most of them can’t be destroyed. The Dungeon walls, ceilings, and under-floor are made of living magical stones. These stones regenerate. It is impossible to break through, destroy, or pass through the magic. The stones are black granite with glitter throughout it. There are beings and monsters that are stone granite golems. They are one with the dungeon and will reform back into existence in 1d6 days. These golems are intelligent and they acted as one with the dungeon.