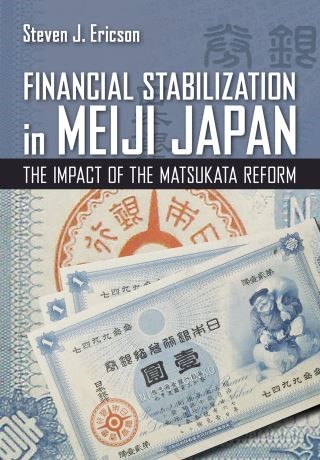 The Impact of the Matsukata Reform

With a new look at the 1880s financial reforms in Japan, Steven J. Ericson's Financial Stabilization in Meiji Japan overturns widely held views of the program carried out by Finance Minister Matsukata Masayoshi. As Ericson shows, rather than constituting an orthodox financial-stabilization program—a sort of precursor of the "neoliberal" reforms promoted by the IMF in the 1980s and 1990s—Matsukata's policies differed in significant ways from both classical economic liberalism and neoliberal orthodoxy.

The Matsukata financial reform has become famous largely for the wrong reasons, and Ericson sets the record straight. He shows that Matsukata intended to pursue fiscal retrenchment and budget-balancing when he became finance minister in late 1881. Various exigencies, including foreign military crises and a worsening domestic depression, compelled him instead to increase spending by running deficits and floating public bonds. Though he drastically reduced the money supply, he combined the positive and contractionary policies of his immediate predecessors to pull off a program of "expansionary austerity" paralleling state responses to financial crisis elsewhere in the world both then and now.

Through a new and much-needed recalibration of this pivotal financial reform, Financial Stabilization in Meiji Japan demonstrates that, in several ways, ranging from state-led export promotion to the creation of a government-controlled central bank, Matsukata advanced policies that were more in line with a nationalist, developmentalist approach than with a liberal economic one. Ericson shows that Matsukata Masayoshi was far from a rigid adherent of classical economic liberalism.