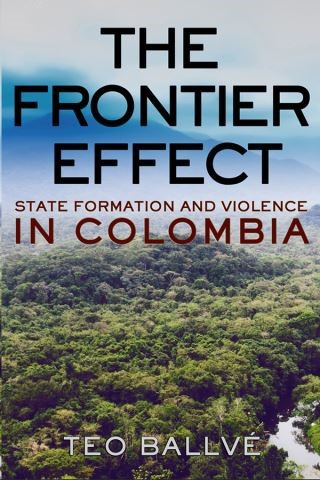 State Formation and Violence in Colombia

In The Frontier Effect, Teo Ballvé challenges the notion that in Urabá, Colombia, the cause of the region's violent history and unruly contemporary condition is the absence of the state. Although he takes this locally oft-repeated claim seriously, he demonstrates that Urabá is more than a case of Hobbesian political disorder.

Through his insightful exploration of war, paramilitary organizations, grassroots support and resistance, and drug-related violence, Ballvé argues that Urabá, rather than existing in statelessness, has actually been an intense and persistent site of state-building projects. Indeed, these projects have thrust together an unlikely gathering of guerilla groups, drug-trafficking paramilitaries, military strategists, technocratic planners, local politicians, and development experts each seeking to give concrete coherence to the inherently unwieldy abstraction of "the state" in a space in which it supposedly does not exist. By untangling this odd mix, Ballvé reveals how Colombia's violent conflicts have produced surprisingly coherent and resilient, if not at all benevolent, regimes of rule.