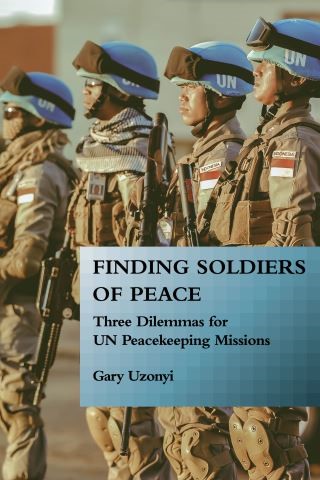 The United Nations, which lacks its own peacekeeping force, faces three dilemmas when organizing a peacekeeping mission: convincing member states to contribute troops, persuading states to deploy troops quickly, and securing a troop commitment long enough to achieve success. The key to overcoming these challenges, Gary Uzonyi argues, is emphasizing the connection between peacekeeping and slowing the flow of refugees across borders. Finding Soldiers of Peace makes the case for this approach, which balances states’ self-interests with the United Nations’ goal of civilian protection.

Through an analysis of post–Cold War UN peacekeeping missions, particularly interventions in Mali and Sudan, Uzonyi shows how member states often tie civilian protection rhetoric to efforts to keep conflict-driven refugees from crossing into their territory. Conventional wisdom holds that member states primarily engage in peacekeeping for payment or humanitarian reasons. Uzonyi proves otherwise, helping scholars and practitioners more accurately predict which member states are most likely to send support, where states may send assistance, when they might become involved, the size of their contribution, and their timetable for leaving.

His research promotes practical strategies for the organization and execution of future missions that ensure member states stay invested in the outcome. A data-rich exploration of the UN response to humanitarian crises, Finding Soldiers of Peace shows how policymakers and practitioners can better strategize the execution of UN peacekeeping missions among diverse, and even contentious, stakeholders.