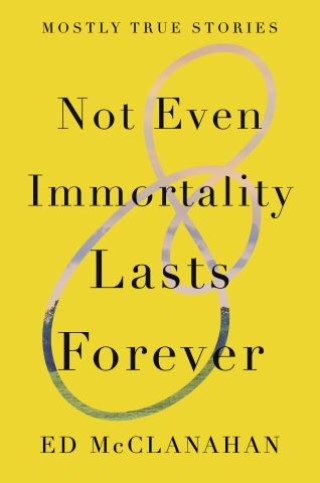 Not Even Immortality Lasts Forever

McClanahan crafts his coming-of-age tales with comic wit and refreshing honesty, inviting readers to relive the memories that shaped his character and career—from hilarious childhood antics in small-town Kentucky to eye-opening adventures on the West Coast


A good story has a mind of its own; it seeks its truth the way water seeks its own level. But where is the line between memory and imagination, between nonfiction and the telling of a good story? In the mostly true stories that make up Not Even Immortality Lasts Forever, Ed McClanahan intrepidly tests the limits of that distinction.

This gathering of fiction-infused autobiographical stories opens in the postwar 1940s with the sudden, brief appearance of an itinerant street performer in McClanahan’s sleepy rural Kentucky hometown, an elderly bicyclist whose artistry seems, to the fourteen-year-old narrator, almost divinely inspired. Subsequent stories trace McClanahan’s uneasy but ultimately tender relationship with his no-nonsense "bidnessman" father and, simultaneously, his growing awareness of his own calling as a writer. McClanahan writes his way into the fabled Stanford University Creative Writing Program and forms lasting friendships with Ken Kesey and his then-notorious cohort, the Merry Pranksters.

After returning to Kentucky in the 1970s, McClanahan published his long-awaited novel, The Natural Man, in 1983, the first of seven well-received books. In 2019, he was inducted into the Kentucky Writers Hall of Fame.

“This may be Ed McClanahan’s best book yet. Never again can I say that I don’t laugh out loud—or walk around reciting to the closest human—while reading a book. This memoir belongs on the same shelf as Nordan’s Boy with Loaded Gun and the works of David Sedaris. What a great, comical joyride by a large-hearted man.” —GEORGE SINGLETON