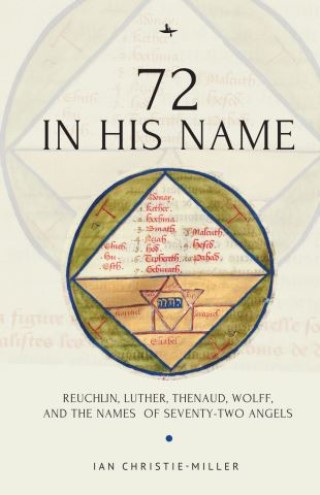 Reuchlin, Luther, Thenaud, Wolff and the Names of Seventy-Two Angels

Leading figures at the dawn of the sixteenth-century Reformation commonly faced the charge of “judaizing”: 72 In His Name concerns the changing views of four such men starting with their kabbalistic treatment of the 72 divine names of angels.

Johann Reuchlin, the first of the four men featured in this book, survived the charge; Martin Luther’s increasingly anti-semitic stance is contrasted with the opposite movement of the French Franciscan Jean Thenaud whose kabbalistic manuscripts were devoted to Francis I; Philipp Wolff, the fourth, had been born into a Jewish family but his recorded views were decidedly anti-semitic.

72 In His Name also includes evidence that kabbalistic beliefs and practices, such as the service for exorcism recorded by Thenaud, were unwittingly recorded by Christians. Although the book concerns early modern Europe, the religious interactions, the shifting spiritual attitudes, and the shadows cast linger on.