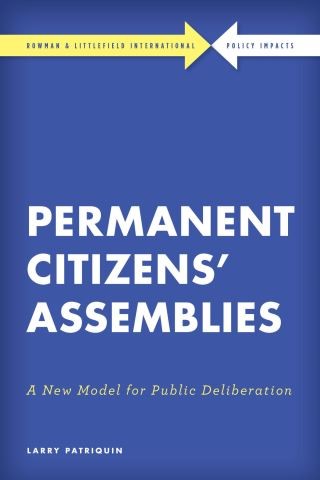 A New Model for Public Deliberation

For a growing number of people, democracy has become synonymous with broken promises and abandoned commitments. Governments everywhere are not listening to their citizens’ concerns on matters of fundamental importance. As a result, ordinary men and women of all political persuasions are demanding transformations, not just to government policies, but to the methods of governance themselves. They realize that in the periods between general elections, they have great difficulty having their voices heard, because they have no formal role in constructing political agendas.

This book focuses on one way to address this problem, by establishing a continual dialogue between individuals and their governments, hence forcing politicians to constantly pay attention to “the people.” Larry Patriquin argues for the creation of permanent citizens’ assemblies, which would be charged with examining issues of public concern and giving advice to governments. For those troubled by our current democratic impasse, Permanent Citizens’ Assemblies: A New Model for Public Deliberation will give hope that practical reforms are possible and that new institutions can become effective components of governance in nations across the globe.