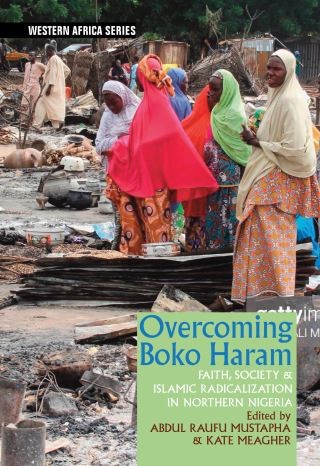 Since 2009, a violent Islamist insurgency has raged in northern Nigeria, at the core of which are two groups: Boko Haram and Ansaru. This book seeks to explain the religious and societal processes which made possible the emergence of such groups; explores the multiple processes that led to the radicalization of many Muslims within northern society; and, significantly, identifies the processes of counter-radicalization which are also pronounced in the society. Several chapters in this volume address the ways through which high levels of unemployment and poverty and a struggling informal economy may lead some individuals toward radicalism and violence. Two chapters comparing the border regions of Nigeria and Niger Republic demonstrate however that it is not poverty alone, but higher levels of inequality that explains why the Nigerian side of the border is more prone to radicalization than the Nigerien side of the border. Another pathway into radicalization takes the form of political grievances, such as repression, extra-judicial killings, excessive and heavy-handed security measures and these and other political dimensions are explored, as well as social dimensions: the roles of the family, educational institutions, media organizations, civil society and faith-based organizations, youth movements and women groups. Finally, the ideological dimensions of the various radical groups, and the historical foundations for radicalization and violence in northern Nigeria are examined.BR ABDUL RAUFU MUSTAPHA, deceased 2017, was Associate Professor in African Politics, University of Oxford. His books include Turning Points in African Democracy (James Currey, 2010), Sects and Social Disorder (ed., James Currey, 2014) and, edited with David Ehrhardt, Creed & Grievance (James Currey, 2018). KATE MEAGHER is Associate Professor in Development Studies, London School of Economics. Her books include Identity Economics: Social Networks and the Informal Economy in Nigeria (James Currey, 2010).