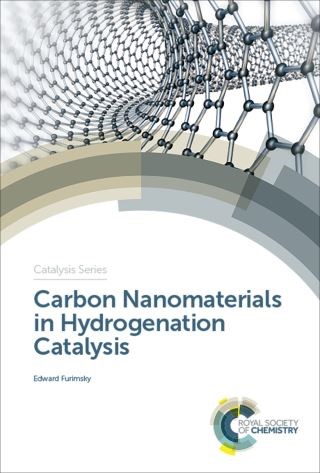 Hydrogenation is a key reaction in both the food and petrochemical industries, where it is used to reduce carbon–carbon double bonds. Without a catalyst, hydrogenation reactions require extreme temperatures to occur, meaning catalysts are essential for the reaction to be industrially useful. During the past decade, the properties of many carbon nanomaterials that are relevant to hydrogenation catalysis have been described, including carbon nanotubes (CNTs), carbon nanofibers (CNFs), carbon nanohorns (CNHs), graphene oxide (GO), reduced graphene oxides (rGO) and fullerenes, that are relevant to hydrogenation catalysis, have been described. For many of these the production methods have advanced to the commercial stage. Numerous studies on the development of catalysts on carbon nano-supports have appeared in the scientific literature and these catalysts have shown remarkable activity and specificity.
Carbon Nanomaterials in Hydrogenation Catalysis is a valuable reference for researchers and chemical engineers working on improving hydrogenation processes and those interested in applications for carbon nanomaterials. Covering their production, modification and applications as a catalyst support this book provides an in-depth review of the current state-of-the art in using carbon nanomaterials for hydrogenation reactions.