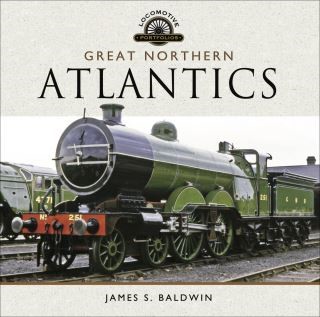 The Great Northern Atlantics, were the first locomotives constructed in Britain to the 4-4-2 wheel arrangement. The Atlantics were designed by H.G. Ivatt, locomotive Superintendent of The Great Northern Railway.Introduced from 1898, with the construction at Doncaster Works of small boilered Atlantic number 990 Henry Oakley, which is now preserved in the National Collection at York, this type of locomotive became one of the most successful types in use on top link express work in the late Victorian and Edwardian era.The small boilered type was followed in 1902, by the large boilered type, examples of which remained in traffic until the early 1950s. The two types of Great Northern Atlantic locomotives were retained in top link service on the L N E R well into the 1920s, as there were not enough of the new Gresley A1 Pacific's to take over top link diagrams.As a result of the success of the Ivatt designed large boilered Atlantic, D. Earl-Marsh, who was in charge of the drawing office at Doncaster, designed his own version of the Ivatt machine, when he moved to Brighton Works as Locomotive Superintendent of the L B S C R.The Great Northern Atlantics, like the Brighton machines had a large following which has continued to this day, with model engineers and small scale modellers continuing to construct fine live steam and electric drive models of these handsome locomotives.