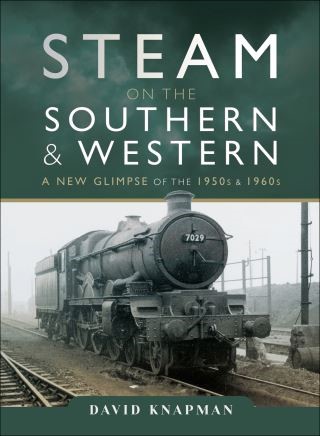 Steam on the Southern and Western

Steam on the Southern and Western is a personal record of railway views that were captured on black and white film in the late 1950s and 1960s, until the demise of steam on British Railways.The style of the book is the well-tried and- tested picture and captions format, and the majority of the pictures are black and white photography. Not every picture portrays a train as there are interesting branch line and infrastructure scenes to view as well. Furthermore, the book is intended to represent an eclectic mix of subjects and not to solely show main line scenes, for example.The book covers the Southern and Western regions of British Railways, with the Somerset and Dorset Railway included for good measure, as it fits neatly into the areas of the country for this volume. It also carries its share of photographs of British Railways standard locomotives in the locations appropriate to the regions. Where preservation starts to overlap with the still-active steam scene, some historic photographs are included.Photographs are grouped together by a particular location, for example, the Redhill to Reading line of the Southern, and Oxford on the Western. Each of these topic areas provides a flavour of the railway activity at the time. Overall, the book presents the reader with a gentle meander through the 1950's and 1960's railway scene and will stir the memories that so many of us have seen and still treasure today.