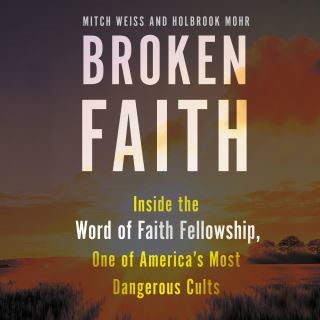 Inside the Word of Faith Fellowship, One of America's Most Dangerous Cults

An explosive investigation into Word of Faith Fellowship, a secretive evangelical cult whose charismatic female leader is a master of manipulation

In 1979, a fiery preacher named Jane Whaley attracted a small group of followers with a promise that she could turn their lives around.

In the years since, Whaley’s following has expanded to include thousands of congregants across three continents. In their eyes she’s a prophet. And to disobey her means eternal damnation.

The control Whaley exerts is absolute: she decides what her followers study, where they work, whom they can marry—even when they can have sex.

Based on hundreds of interviews, secretly recorded conversations, and thousands of pages of documents, Pulitzer Prize winner Mitch Weiss and Holbrook Mohr’s Broken Faith is a terrifying portrait life inside the Word of Faith Fellowship, and the harrowing account of one family who escaped after two decades.

Mitch Weiss is a Pulitzer Prize–winning investigative journalist for the Associated Press and the coauthor of numerous books, most recently The Heart of Hell: The Untold Story of Courage and Sacrifice in the Shadow of Iwo Jima. He lives in South Carolina.

Holbrook Mohr is an award-winning investigative journalist for the Associated Press. He has covered natural disasters like Hurricane Katrina, judicial bribery schemes, the oil spill in the Gulf of Mexico, and mass shootings. He lives in Mississippi.