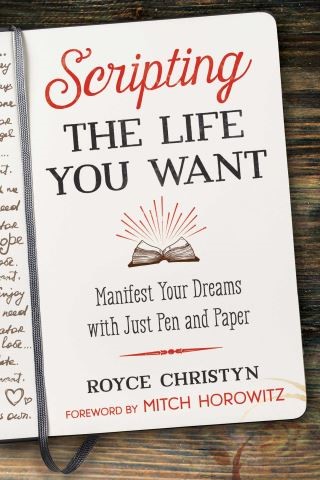 Scripting the Life You Want

Manifest Your Dreams with Just Pen and Paper

• Details how the understanding of incredible new (and, until now, mostly unheard of) scientific discoveries and emerging technologies is the most important key to creating and manifesting in your life

• Reveals fun, easy tools for manifesting and self-help, updated for a new generation

In this step-by-step guide, filled with success stories and practical exercises, Royce Christyn details a simple “scripting” process for harnessing the Law of Attraction and manifesting what you want in your life--happiness, wealth, travel, love, health, the perfect career, or simply a productive day. The process is backed by science and experience, yet it feels like magic. And all you need is a pen and paper.

Inspired by New Thought and Positive Thinking classics, Christyn explains how he developed his scripting method through 4 years of trial and error, keeping what worked and dropping what didn’t until he brought his success rate from 5% to nearly 100%. Sharing pages from his own journals, he outlines how to create the life you want with daily journaling exercises, beginning with a simple list-making practice to figure out your wants and intentions and then progressing to actual scripting of your future, whether the next 12 hours or the next 10 days. He shows how, over time, your scripts will increase in accuracy until they converge with reality. He shares the vivid entries from his big breakthrough--when he successfully used his method to land a lead guest-starring role on Disney Channel’s Wizards of Waverly Place with Selena Gomez. He explores how “feeling” your future success as you write your daily scripts helps attract your desired outcomes, and he shares the key phrases to include to make your script come true. The author also explores the science behind how the scripting method works, including a down-to-earth examination of quantum mechanics.

From small dreams to lifelong goals, this book gives you the tools to put your thoughts into action and finally close the gap between where you are and where you want to be in your life.

Royce Christyn: Royce Christyn is an actor, speaker, writer, and documentary film director. He has appeared in film and television shows, including Drake and Josh, Zoey 101, and Disney Channel’s Wizards of Waverly Place with Selena Gomez. His bylines have appeared in national and international publications including Paste Magazine, In Touch, Life & Style, Closer, and others. He has appeared on BBC World News, NBC News, CBS’s The Couch, Fox’s MORE Entertainment, TMZ Live, and hundreds of radio and news shows across the globe. He lives in Los Angeles.Mitch Horowitz is a PEN Award-winning historian, longtime publishing executive, and a leading New Thought commentator with bylines in The New York Times, Time, Politico, Salon, and The Wall Street Journal and media appearances on Dateline NBC, CBS Sunday Morning, All Things Considered, and Coast to Coast AM. He is the author of several books, including Occult America and One Simple Idea. He lives in New York City.