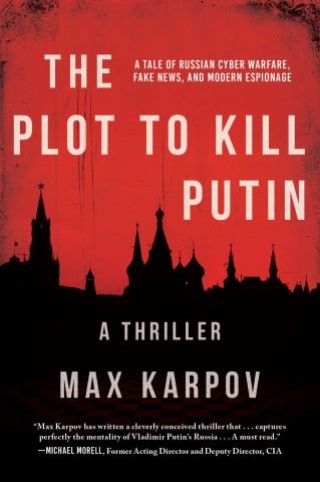 The Plot to Kill Putin

A Frighteningly Plausible, Fast-Paced Thriller about a Russian Cyberattack on America and a Plot to Kill President Putin, Involving Fake News and Anonymous Hackers

The CIA has learned that the Kremlin is about to launch a sophisticated propaganda operation aimed at discrediting and disrupting the United States and ultimately restoring Russia to great nation status.The operation revolves around a plot to implicate the United States in the attempted assassination of Russian President Vladimir Putin. The plan was conceived by a Russian billionaire and former FSB officer named Andrei Turov. For years Turov has been developing the infrastructure for a new kind of warfare that exploits weaknesses in western democracies and manipulates public opinion. His organization offers the Kremlin plausible deniability.

But the United States has its own secret weapon: Christopher Niles, a former CIA intelligence officer, who understands Turov's ambitions and capabilities. It falls to him and his small team--composed of his journalist half-brother Jon, a special forces operative he would trust with his life, and Anna Carpenter, a resourceful US senator with deep roots in the intelligence community--to unravel Turov's plot and restore truth to a world spiraling into chaos.

The Plot to Kill Putin is a chillingly realistic, timely thriller that delves into the secret corners of Vladimir Putin's Russia, exploring the shifting world order and the murky realm of US-Russia relations.

Previously published in the hardcover as The Children's Game.

Max Karpov: Max Karpov is a Washington-based novelist and investigative journalist. A longtime Russia-watcher, Max spent several years researching and writing The Children’s Game, a geo-political thriller novel about current-day U.S.-Russia relations. He has written features for The Washington Post, The Miami Herald and elsewhere. He lives in Naples, Florida.